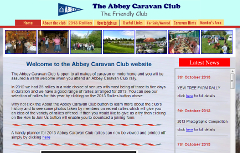 Everyone is welcome in the Abbey Caravan Owners Club, no matter the age, make or model.

The Club was originally founded in 1970 for all owners of Abbey or Piper Caravans but in 2009 after Swift leisure ended production of Abbey caravans, it was opened up to every type of caravan or motorhome.. The aim of the club is to gather friends together at weekends to enjoy life in the open air and away from the pressures of life. Wherever you live, whatever your taste in caravanning, you’ll enjoy the friendly fellowship that the Abbey Caravan Owners’ Club can offer.

Enjoy the company of a small circle of fellow caravanners

Whether you’re a caravanning novice or rather more experienced, membership the Abbey Caravan Owners Club can bring you a wide range of attractions and benefits – all designed to help you get even more pleasure from your caravan. Throughout the year, you will be able to choose from a variety of different venues across the country. One week you may be visiting a stately home the next taking an invigorating country ramble or maybe just a quiet few days away. There’s usually something for everybody. Whatever you choose, activity or relaxation, every weekend can seem like a mini-holiday enjoying the company of fellow caravanners.

Coming from all walks of life

Abbey caravan owners have at least one thing in common – a love of caravanning. Some can count their caravanning experience in weeks and months, others may admit to being rather more experienced. Without exception, all like enjoying themselves and sharing their hobby with other Abbey caravanners. Most weekend get togethers have an average of 15 to 25 families attending and there’s never any pressure what so ever to join in any of the activities. But we bet that once you’ve done it once you’ll do it again.

Annual membership is £20 a year, and the form can be found here;(Link to Club website: Abbey Caravan Owners Club), which then can be printed off and sent by post with your cheque or postal order.

Listed in this section

If you are looking for good value caravan insurance give Caravanwise a try.