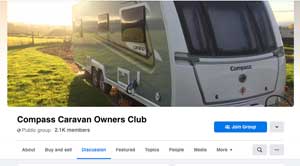 The Compass Owners Club began its life when four Compass owners got together; With assistance from the Compass factory, they contacted other Compass Owners and in 1983 an Inaugural Rally was held at Witton Castle in County Durham on the May Bank Holiday weekend.

Although originally for Compass owners, since 2009 all makes and models are welcome.

Over the 30 years the club has been active the number of rallies has increased to approximately 30 per year and at the end of 2007 the Club had successfully ran 772 events. Venues have been found throughout the the country – from the north of Scotland to the South Coast and Cornwall. These have been in delightful areas which have catered for the many interests of our members. There have also been a number of successful holiday rallies. The Club has also held a number of rallies in France, Holland and Eire.

The rallies, on average, attract about twenty vans, and this leads to a friendly atmosphere on site. Each rally is organised and run by members, although help is always at hand from other members and members of the committee. Recently Compass have announced they shall be reinstated and from September 2013 will be making four new styles of Compass caravan; for those who are interested in buying one of these vans, this club would be perfect for you.

Here you will find the link to the club website where you can easily join the club.

Listed in this section

If you are looking for good value caravan insurance give Caravanwise a try.